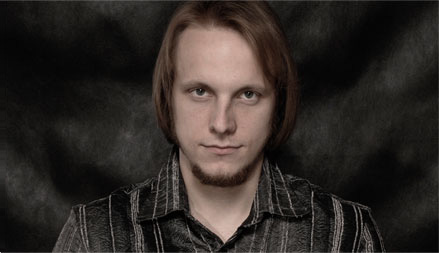 Born in 1983 in Moscow (Russia).
He graduated from the Moscow State Academic Art Institute. VI Surikov (2007),
the Institute of Contemporary Art (2003).
Member of Moscow Union of Artists.
Grant of the Ministry of Culture (2007–2008).
Doctor of Art Criticism

The person of the artist is the object demanding infinite introspection. Generation behind generation, «authors of art», conducted by a similar steadfast sight on themselves, make efforts to creation of something, approving unique individuality, but recognizing presence of mystical,mysterious spheres which supervise over them. But that transforms the artist into the shaman to whom are peculiar prophetical an enlightenment and opening from area of noosphere – for ever remain a unsolved secret.

It is impossible to tell, that anybody is not interested in such secret, except for artists.Historians of art frequently «solve» quite «terrestrial», «profane» a material resources supporting ideology of the artist, or build a history of art as change of historical styles in which the artist, in their opinion, does not play the most important role.

Nevertheless, according to well-known statement of Bourdieu, art and sociology get on badly. Historians of art are sociologically deaf, and sociologists of art are aesthetically blind, – probablyon that only to the reason, that in a basis of a art criticism history one more «has lain too long» «divine secret of the individual genius» which only it is possible to admire, and various sociological approaches to art – aspire «to open and condemn – prove» this secret that refers to, on all severity of the law.

Research of this problem is difficult, however safely it is possible to declare consideration of this question, that the present state of affairs in art shows, that it (art) is «private affair» and «private life» of everyone who is engaged in it. As though strange did not sound it's an intimate process. In what a genre operated, what strategy wouldn't used by the author, all over again he needs to go through it inside itself. And is farther as will carry, well or will not carry. It too a mystery.

«Talent» also is shrouded in «fog», and it is no wonder, that scientifically proved researches of talent is not observed almost.

Thus, from what side try to analyze the purposes, functions, «creative units», and a nature of art with prospects of its development remain rather and rather mysterious. And what the artist would not appear at us in our perception, from the aforesaid it becomes obvious, that today for an stimation of his activity is not produced uniform and high-grade «the conceptual device».But, despite of it, subjective versions are possible.

Ivan Korshunov's creative credo and his person is not a collective portrait of young generation of the Moscow artists or the character nominal, but can illustrate some theses of the given text clearly.

Today in Russia the certain role is not imposed to the artist: to prove, to discredit, to experiment, to shock. Basically from a tacit consent it is possible to make all. That you can, that you want, well and as too. However any artist all the same is in system of continuity of cultural development, rather difficult process, deprived linearities. Thanking and contrary to this process the person of the author is formed.

The vector of creative efforts of Ivan Korshunov is at first sight directed just on «fundamental» secrets. To anyone in the slightest degree understanding clearly, that «food» of his products is the powerful stream of infinite number of bible plots and parables which «had» christianity and all West-European, and then and Russian painting.

Sacrament of birth, sacrament of love, sacrament of death – the big themes which inmodern perusal are treated by Ivan Korshunov. And all would be simple before us only one of newversions of Bible plots, if not mentioned before personal experiences.Ivan Korshunov's creative activity is similar to returning to sources and the bases, but whether it is caused by intention to reveal in passed ways of art dead approaches in a due measure and methods – it is not known. Nevertheless, his painting (he works in this genre) is an attempt to seethrough the last present. Certainly, this tendency is not new. In general it's characteristic for a postmodernism dominant in last decades. At the same time for a postmodernism typically that itsmaintenance is not new at all.

Faster echoing, rather than contradicting Baudrillard's idea (as the ideologist of a postmodernism), that each work of art reproduces something, that in itself already is reproduction, Ivan Korshunov uses a photo as a basis of picturesque product. Combining receptions late academic painting with opportunities of images-media, the artist creates the pictures aspiring «to discredit» the spectator risky, almost on the verge of foul display of a sensual nature «pseudo-fine» and «apparent» non-standard of treatment of known plots. It is original ambiguous game in academism: the postmodernist attitude to «an arsenal of the past», mixed with advances with a certain «depersonalized mass» spectator. The volumetric maintenance of a plot becomes flat, and flat,«frontal» expression of a plot gets that mysterious substantial depth.

Originally abstracting from images of concrete persons and characters (which he paints) and simulating «consumer goods», and also «baroque» emblems, clear as now it is accepted to speak,in «past epoch», Ivan Korshunov searches for ways to express environmental life and a life as«sacrament».

However attempt to contain in space of a picturesque cloth «performance» a theatrical masquerade with photo-fixing of «changing clothes of the ordinary» in «sacral» turns around a game reflection concerning a symbolical interlacing of destinies of «figurants of cloths» with their historical prototypes. Sense addressing to substantial aspects of the Bible, Ivan Korshunov brings serious hint in considered «hackneyed enough» reception, complicating it and inverting.And the strike of mystery formed at manipulations with figurative ranks, apparent or reallypresent, in a combination with creative and full recognition of the represented motive should approach in recognition of the potential spectator of border real and irreal, that, most likely, is one of tasks of «aesthetic research» young artist.

Whether and there it will be or not it is a secret too. Let it is small secret.
(Doctor of Art Criticism T. Smirnov, 2013)